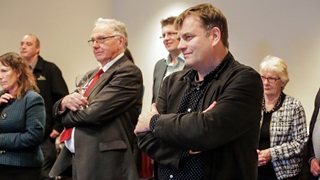 GoShift was officially launched on Thursday 26 May 2016.

Representatives from the 24 councils involved, as well as leaders from the building and architecture industries, attended the launch which was held at Amora Hotel in Wellington.

Ross McCarthy, GoShift's Strategic Engagement Manager, said the launch marked a significant milestone in the project which aims to make the building consent process simpler and faster for everyone involved.

"We now have a standardised set of forms for all councils," he said. "While this is one of the smallest changes we'll be making it's a great starting point."

Clare Hadley, Chief Executive of Nelson City Council, told the launch that GoShift was a great example of councils working together from the ground up as well as the top down.

She says it's a credit to all the Councils involved that GoShift is underway.

"This is a genuine initiative that will improve the system at every stage of the process," she says.

The next phase of the project will see other parts of the consent process, such as approvals and inspections, standardised.

Watch the video of the launch below: